About Betting on Shorts

‘Betting on Shorts’ (BoSs) is an annual short film festival/competition which brings together cutting-edge venues and film festivals across and beyond Europe in a unique simultaneous screening: “More than a Eurovision of Shortfilm”.

Each year a themed open call for submissions is posted worldwide. 10 – 15 shorts of any genre (but under 10 minutes) are selected to take part in the competition, which is screened simultaneously in all participating cities. A local winner is chosen by a jury of critics, curators and other film professionals in each city. Once all juries have compared their results the overall winner is awarded glory, fame and cash. So the audience can have some fun as well, we invite everyone to bet on which film will win. Bets must be placed before the screening. But no worries: trailers of all participating films are screened in all participating venues and on the website a week in advance of the competition. Those who have placed their bet well, can win cinema tickets, dvds, books and the like.

A Little Bit of History 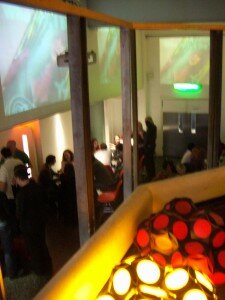 BoSs was launched in 2005 by Ricarda Vidal and Louise Höjer, as an annual short film competition at the Institute of Contemporary Arts (ICA) in London. BoSs is now run by Ricarda, Irini Marinaki, Konstantinos Stefanis and Sarah Sparkes.

In 2006 an invitation to programme three screenings in the Kunstfabrik in Berlin (‘Vacant Films’) in collaboration with a local artist group marked the beginning of our international presence and formed the starting point of what was soon to grow into a large pan-European network of cultural organisations and institutions. With the aim to make BoSs into a truly international event, we contacted film curators, professionals and enthusiasts across the continent. In November 2007 we launched the first edition of “More than a Eurovision of Shortfilm” in collaboration with 10 partners.

Past and present partners since 2007 have included:

A longlist of ca 40 films is selected by the BoSs team in London from the bulk of submissions. The shortlist of 10-15 films is chosen later in the year at a convention with representatives of all partner institutions, which takes place in a different city each year. For “More than a Eurovision of Shortfilm” the shortlisted films are screened simultaneously in all participating venues and judged by a panel of renowned film-curators and critics (in London, for example, the panel includes leading UK film-curators from Tate Modern, ICA, Future Shorts, London Short Film Festival and LUX).

Each jury chooses only one winner. In an audiovisual-conference we compare results in all venues and determine the overall winner. The winner is awarded a cash prize to help realize future projects.

Decisions that are based on the personal tastes and opinions of cultural critics and curators are always to a certain degree arbitrary. Whether a film wins is not only based on its outstanding quality but also on luck. It’s a bit of a gamble. We liked that and decided to give the audience a chance to play as well.
Therefore, we invite everyone to bet on which film will be the winner.* 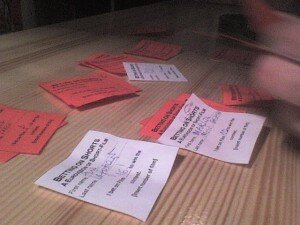 The bets must be placed before the screening. A week before the event, short trailers of all films are streamed on our website and are on show in the participating venues. On the day of the screening a betting booklet (containing a still and synopsis for each film) will also be available. Bets must be placed before the audience enter the cinema. Those who have placed their bets well can win cinema tickets or similar small prizes.

The overall framework and schedule for the event is synchronised across all venues: The audience place their bets, watch the same programme and adjourn to the bar to wait for the local judges to come to a decision. The integration of the audience through the betting creates an intimate atmosphere where everybody feels involved with the films on a more personal level.

What interests us is to create a situation which takes on a different shape in each city and inspires a different reaction. The audio/video conference transgresses geographical borders by creating a space where people can meet and communicate on an international common ground, which encourages a playful and creative cross-cultural exchange.

* To sidestep the issue of a betting licence no money can be bet. It is more like a game than a gamble: The audience will simply be asked to fill in a form with their name and the title of the film they believe to win.